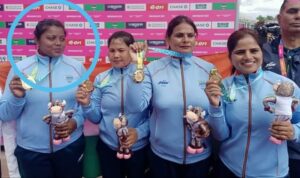 Notably, in the lawn ball competition being held in Birmingham, the Indian women’s team scripted history by winning the country’s first-ever gold medal in lawn bowls by defeating the South African team 17-10 in the final.

South Africa had a dismal start, scoring zero points for five straight ends. After End 7, when Esme Kruger’s shrewd thinking and effective attempts got South Africa moving, the score read 8-2 in favour of India. After 11 ends, it even had a 10-8 lead. But in the end, it was the Indians who won.