The Jharkhand Congress is likely to lodge a formal complaint to the Jharkhand Assembly speaker against its three party MLAs for their alleged anti-party activities.

Sources in the state Congress has said that the party will approach assembly speaker Rabindra Nath Mahto for their dismissal from the assembly.

Notably, the Bengal Police has arrested three MLAs of the Congress party in Jharkhand after cash worth Rs 48 Lakh was recovered from their car during a checking drive at Ranihati locality in Howrah on Saturday. All three namely Irfan Ansari, Rajesh Kacchap and Naman Nikal Kongari have been suspended from the party.

“It is very disturbing to note that these three MLAs were trying to destabilize their own government for which they will playing in the hands of the BJP. Their activity was under the watch and now they have been caught along with money. This is a very painful and shameful situation for the party. We are mulling the prospect of dismissal of their membership from the assembly. Hence we may approach the assembly speaker for a suitable action,” said a senior Congress leader. 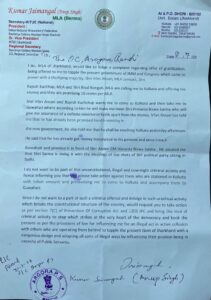 t sections of the Prevention of the Corruption Act. The Congress blames the BJP for destabilizing the Hemant Soren government

In a press conference called at the Congress headquarters in Ranchi the state president Rajesh Thakur accused the BJP of destabilizing the JMM-Congress-RJD government in Jharkhand. He was joined by the JMM spokesperson Supriyo Bhattacharya. They alleged the BJP was hell-bent to demolish democracy in the country by targeting the opposition-led government.